At the coming Paris Motor Show we will be introduced to the C-HR Concept from Toyota which is a pretty funny looking SUV that is pitted as a rival for the Nissan Qashqai, though from looking at it you may have expected it to be more of a rival for the Nissan Juke. Looks aside it will possess Toyota’s hybrid powertrain technology. We are guessing it will be a new hybrid petrol/electric technology that will probably be featured in the coming Toyota Prius which is due in 2015. 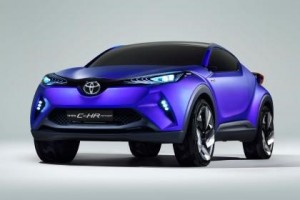 If you consider the C-HR’s supposed rivals it would make sense for Toyota to develop a four wheel drive powertrain for the C-HR. After seeing some spy shots of the new Toyota Auris, we assume that the C-HR will be part of that family within Toyota slotting in just under the RAV4.

In terms of looks it’s like no other Toyota we’ve seen before, it is incredibly sloped and angular, leaving the windows looking very squinty and focused. The front of the car looks huge though that could be down to the angle of the photo exaggerating the front. 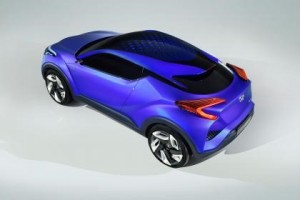 The rear window almost carries on seamlessly from the roof without the angle really changing too much at all. We haven’t seen an indication of the price anywhere as of yet, as the actual production model isn’t expected until 2017. Expected to find out more in the wake of the Paris Motor Show.